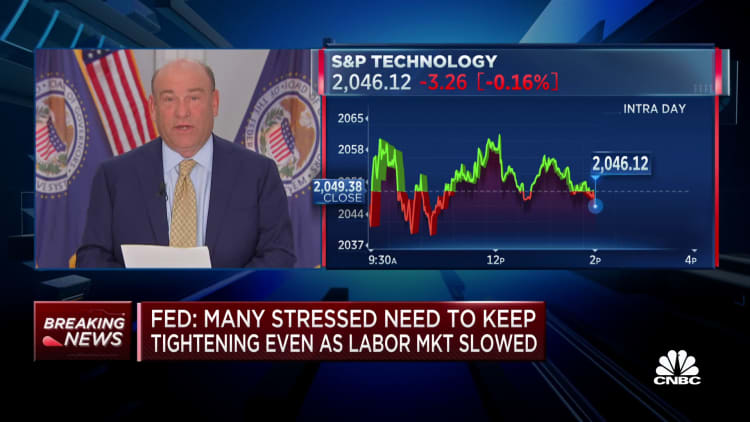 Federal Reserve officials were surprised by the pace of inflation and hinted at their last meeting that they expect higher interest rates to remain in place until prices fall, according to minutes released Wednesday from the central bank’s September meeting .

In discussions that led to a 0.75 percentage point hike in interest rates, policymakers noted that inflation is taking its toll particularly on low-income Americans.

They reiterated that rate hikes are likely to continue and higher rates will prevail until the problem shows signs of resolution.

“Participants felt that in order to fulfill the Committee’s legal mandate to promote maximum employment and price stability, the Committee needs to move to a more restrictive policy stance and then maintain it,” read the summary of the meeting.

Officials also noted that inflation “so far has shown little sign of slowing down…they had upgraded their assessment of the trajectory for policy rates that would likely be required to meet the committee’s targets.”

The S&P 500 gained slightly On Wednesday, following the release of the minutes, some traders took comment as a signal that the Fed could reverse its rapid tightening should there be further financial market turmoil.

“Several participants noted that, particularly in the current highly uncertain global economic and financial environment, it would be important to calibrate the pace of further policy tightening to mitigate the risk of a material adverse impact on the economic outlook,” the minutes said.

The meeting came ahead of a recent data flow showing inflationary pressures remain elevated, albeit not at the pace they were earlier in the year. The Fed’s preferred inflation measure for consumer spending rose 6.2% in August from a year earlier — 4.9% excluding food and energy — according to data last month, well above the central bank’s 2% target.

A report on Wednesday showed Producer prices up 0.4% in September.

“Participants noted that inflation remained unacceptably high, well above the committee’s longer-term target of 2 percent,” the minutes read. “Participants commented that recent inflation data was generally better than expected and that inflation was correspondingly falling at a slower pace than previously expected.”

Members of the rate-setting Federal Open Market Committee noted at the meeting that the economy needs to slow down to cool inflation. They lowered their forecasts for the economy, expecting GDP to grow just 0.2% on an annualized basis in 2022 and just 1.2% in 2023, well below the trend and sharp contraction of 2021, which marked the strongest gains since 1984 recorded.

They said inflation is being driven by supply chain issues not limited to goods, but also a shortage of workers.

However, officials also expressed optimism that the policy would help loosen the labor market and lower prices. Officials have recently said they do not expect interest rates to stay high until inflation falls to 2%.

“Participants felt that inflationary pressures would gradually ease over the coming years,” reads the summary.

The session ended with the FOMC approving its third straight 0.75 percentage point hike, bringing benchmark interest rates to a range of 3% to 3.25%. Markets are broadly expecting a similar rate hike to be approved at the next meeting in early November.

Officials noted that they see a point coming when the pace of rate hikes will at least slow, though they have not set a timeframe for when that will happen.

The minutes said FOMC members noted that “at some point it would become appropriate to slow the pace of policy rate hikes while assessing the impact of cumulative monetary policy adjustments on economic activity and inflation.”

They said that the time would come after the fed funds rate “reached a sufficiently restrictive level” when “it would probably be appropriate to maintain that level for some time until there is compelling evidence that inflation is on the way.” is on the 2 percent target.”

The roundup of economic forecasts at the meeting pointed to a “terminal rate” or endpoint of rate hikes of around 4.6%. Markets expect the Fed to hike until early 2023 and then leave rates there all year.