Written by admin
Polygon’s new Collosus N9 made its first appearance in all its glory Urban camo painted glory at Sea Otter this year, complete with the IFS suspension layout first seen on the mountain. Bromo eMTB. The bike has 29″ wheels front and rear (it is not compatible with mixed wheels) and 170mm of travel. After a season of enduro racing and refinement, it’s now available with an aluminum frame and a price of $3,299, in stark contrast to the ultra-expensive carbon machines that have been launched recently.

Polygon has put together a great package of parts for the price. Suspension is handled by a Fox 38 Performance fork with a Grip damper and a 230 x 65mm Float X2 shock. SRAM Code R brakes with 200mm rotors help keep the speed in check, and Shimano handles shifting via an XT front derailleur, SLX cassette and XT cranks. Unfortunately, these cranks are 175mm long, which may not be ideal for riders on rockier terrain. 2.6 inch wide Schwalbe Magic Mary tires are mounted on Entity rims with an internal width of 35 mm.

Details on the colossus N9

All that adds up to a not-inconsiderable 39.25 pounds (17.8 kg) – Collosus seems a very fitting name given those numbers.
frame details

The frame of the Collosus is visibly strong; Everything from the front shock mount to the double-braced swingarm makes it look like it was built to take a beating. All of these linkages and the shock location take up valuable water bottle space, meaning only a “regular” sized bottle will fit in the front triangle. Still, it’s better than nothing. There’s also no in-frame storage or accessory mounts to be seen. Another missing feature is a universal derailleur hanger, something that will likely become more of a “must have” if the rumors about SRAM’s next-gen drivetrain are true.

There is a ribbed chainstay protector, although it’s a little short – more coverage to the front of the chainstay would help keep the paint from chipping off the chain. The brake, derailleur, and dropper lines are routed internally, although there’s not really anything in the frame to stop them from rattling – luckily I didn’t notice too much noise on my test bike.

It’s nice to see that the Collosus comes with a chain guide and impact guard, as the crunch of a chainring is a great way to put a damper on a race run. There’s also a frame guard on the underside of the downtube to protect it from flying rocks or truck tailgates. 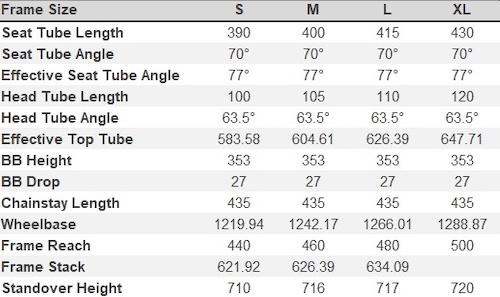 Most of the geometry figures of the Collosus are in line with what has become the norm for this category. Head angle is a loose 63.5 degrees with a 170mm fork, reach is 480mm for a large size and seat tube angle is 77 degrees. The chainstays are consistently on the shorter side at 435mm – they don’t change with each size, a practice more and more companies are adopting.

Polygon seems to have an affinity for suspension designs that deviate a little from the norm – there was the wild-looking floating dual-link FS3 design back in 2014and the even fancier aesthetic of the Square One EX9 with its R3ACT suspension in 2017. The Collosus keeps the trend alive, although the overall picture probably won’t be as polarizing as the other two examples.

It uses a version of the IFS (Independent Floating Suspension) design first seen on Mt. by Polygon. Bromo eMTB. The concept is that the two lower counter-rotating short links can be used to set axle travel, while the seatstays and rocker arms are used to set leverage curve or progression. All of these connections can make it easier for designers to achieve desired suspension characteristics, but it also means there are 16 cartridge bearings to keep track of, and the lowest set of bearings is just in front of the rear wheel, right where mud and dirt gets on end up with a sloppy ride.

Anti-squat percentages are quite high, hovering around 121% at sag before gradually dropping off as the bike goes through its journey. The scaling of the graph makes the progression seem pretty extreme, but it’s actually around 19%, which is pretty typical for a longer-travel enduro bike.

For those who say weight doesn’t matter, I recommend taking the Collosus for a spin. I’ve spent a lot of time – years, really – pedaling around on bikes in the 40-pound range, and I’m far from a weight weenie, but I’ll admit it’s a little harder to find the motivation to do it on one long pedal on such a heavy bike. Who knows, maybe I’m just getting soft.

Yes, I realize the Collosus isn’t an insanely expensive carbon fiber wonder bike and I’m willing to let it down a bit in the weight department given the price and solid parts kit, but £39 is still pretty chunky. I can’t help but wonder how much weight and complication would have been saved had I gone with a proven Horst link layout instead of fitting the links required by the IFS suspension layout?

Weight aside, the Collosus does Pedal well, especially for a bike with 170mm of travel. The suspension is smooth enough that I didn’t feel the need to flip the Float X2’s climb switch, and even during prolonged fire road grinds I was perfectly content to hold it in the open position. The chainstays are on the shorter side of the spectrum, but the steep seat angle and slack head angle work together to keep the bike from feeling like it’s looping on steep climbs. While it’s a fairly solid, floppy bike, I didn’t find it overly difficult to maneuver through tighter switchbacks or more technical sections – it’s really the slow-rolling tires and overall weight that give it a more cushioned feel when it’s going uphill.

When it’s time to descend, the Collosus isn’t the fastest out of the gate, but it feels very solid and is ready for anything once it revs up. The rear end is fairly stiff, and this trait combined with the shorter chainstays makes it easier to engage and disengage the rear wheel from tight corners, although this comes with somewhat reduced traction and stability – at times it felt like the Collosus’ rear wheel rather slipped through a curve than carving a clean arc. It also doesn’t have the plushest, fluffiest suspension feel; It takes the edge off the rough stuff, it just doesn’t erase those bigger hits in the same way some other bikes in this travel class do.

Overall, the Collosus N9 offers excellent value when it comes to parts spec, and the geometry won’t hold it back as long as you keep it aimed at steeper, more technical trails. Weight is the biggest downside, although this might not be a huge issue for riders who spend most of their time climbing in a shuttle vehicle or sitting on a chairlift.