Peruvian authorities have shut down the famous Machu Picchu tourist attraction amid ongoing protests that have killed dozens since they began a month ago.

Since early December, demonstrations have spread across the Andean nation, with fresh clashes reported in Cusco, gateway to the nearby Inca Trail and ancient ruins of Machu Picchu.

The cultural authorities in Cusco said in a statement that “given the current social situation in which our region and country are immersed, the closure of the Inca Trail network and Machu Picchu has been ordered from January 21 and until further notice “. .

Protesters tried to take over the city’s airport, which many foreign tourists use to get to the area, leaving 37 civilians and six police officers injured, according to health workers.

Please use Chrome browser for a more accessible video player 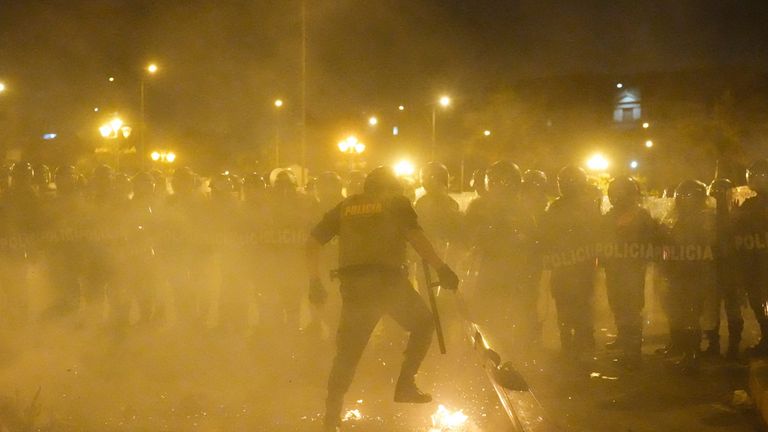 Thousands of protesters have clashed with police in Peru’s capital

Airports in Arequipa and the southern city of Juliaca were also attacked by protesters, hurting Peru’s tourism industry.

Protests and road blockades against the government of Peruvian President Dina Boluarte and in support of the ousted President Pedro Castillo also took place in 41 provinces, mainly in southern Peru.

Some of the worst violence happened Monday when 17 people were killed in clashes with police in the town of Juliaca, near Lake Titicaca. Later, protesters attacked and burned a police officer.

Security on Friday Emergency services in the capital Lima used tear gas to fend off protesters who threw glass bottles and rocks while fires burned in the streets.

Unrest was sparked in early December by the plight and arrest of Castillo, Peru’s first president of humble, rural origins, after his widely condemned attempt to dissolve Congress to avoid impeachment.

The demonstrators, mainly from neglected rural areas of the country who are still loyal to Castillo, are demanding immediate new elections, Boluarte’s resignation, and Castillo’s release.

They also want justice for the protesters killed in clashes with police.

Dozens of civilians were killed in clashes with police and at least seven died in traffic accidents linked to the barricades.